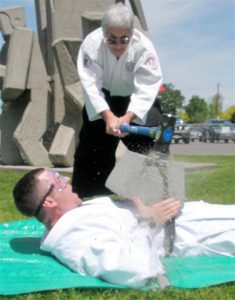 It was all about Ohana at Medford Judo Academy’s 50th Anniversary celebration held May 14th to 16th.  Dozens of Professor Larry Nolte’s former students joined his current students and AJJF jujitsuka from around the country to honor Professor Nolte for his 50 years of selfless service at his dojo located south of town in Medford, Oregon. In fact, the Medford Judo Academy is the oldest dojo in a single location in the AJJF, and among the oldest in the nation. That means that men, women and children of three generations are all part of the Medford Judo Academy family.

Though many took advantage of the reunion to renew old friendships, there was a lot happening on the mat as well.  On Friday night, May 14th, AJJF professors and instructors participated in a session on the inner arts of Danzan Ryu, taught by Senior Professor Tom Ball.

Early the next morning, eighty eager students lined up in the wrestling gym at nearby Crater High School and prepared themselves for a day of concentration, hard work, and hui miki miki (Hawaiian for “lots of pep”). Their instructors included AJJF professors Ball, Congistre, Carr, Cross, Lane, Nolte, and Hager joined by Sensei’s Bodnar, Ferris, DeGarmo, Himmah, Beltrami, Shehorn, Lollis, and Ellis. Classes ranged from Hanbo techniques to Oku2 and torture sticks from the Kiai no Maki.  With four classes going on at any one time, the spirit in the gym was so strong that the building shook with every throw.

Professor Nolte had promised us a surprise jujitsu demonstration on the lawn following lunch. Earlier, I observed Senior Professor Ball huddled with MJA Nidans Jesse Ellis and Kevin Lollis.  Something mysterious was afoot.  Sensei Jesse and Sensei Kevin were ready to demonstrate a dangerous technique they had never practiced before—the Kiai no Maki art of Hara Age Ishi Wari—the “stomach lift stone break”. Jesse volunteered to go first.  After donning safety goggles, he lay down on his back on a tarp and positioned a pier block on his stomach.  When Jesse signaled he was ready, Professor Ball lifted a sledge hammer high over his head, paused for a moment, then brought the hammer down full force on the block three times, which shattered it into pieces. Jesse stood up, unscathed. A minute later, Professor Ball raised his hammer again and smashed a block on Kevin’s stomach, and chunks of rock went flying.  The demonstration was a spectacular success.

With seven hours of jujitsu under our obi’s, everyone was ready for the sumptuous banquet at the high school cafeteria that evening.  The Future Farmers of America served 150 of us a meal of “meat and potatoes.”  Yes, BBQ roasted pork, chicken and tri-tip with chunks of tasty taters, green beans, and salad.  After the feast, we enjoyed a delicious commemorative cake.  We were treated to Hawaiian dances by Leilani Kahananui and her two lovely daughters.  Next, we watched an interesting multimedia slide and video show on the history of the Medford Judo Academy.  Finally, we caught a glimpse of Buz Norton’s gi, the only one remaining with one of the five original patches made in 1958.

And there was more. Professor Nolte was gifted with a chop (dojo imprint) from Senior Professor Ball, Professor Nolte’s sensei and founder of the Medford Judo Academy.  Sempai Troy Shehorn and the black belts of MJA presented Professor Nolte with a custom gi which featured the dojo logo on the back. His students also gave the Professor a commemorative plaque to mark the occasion and a custom-made knife made of steel folded over 400 times. Then Professor Nolte elevated Gary DeGarmo to Godan and promoted four of his brown belts.  To conclude the evening, Professor Nolte, reflecting on the past, present, and future of the Academy, said, “This is only the beginning.”

We all gathered at the MJA dojo at 0900 the next morning for another four hours of jujitsu.  This time it was instructor’s choice.  The professors, sensei’s, and several black belts taught us a technique or variation they liked.  Arts ranged from classical Judo’s O Uchi Gari to a mean version of Mae Osaegami Nage.   There was plenty of ki and lots of hui miki miki. As we got ready to call it a day, Professor Ball shared a few stories of MJA’s beginnings back in 1958.  It was all about family, all about Ohana.